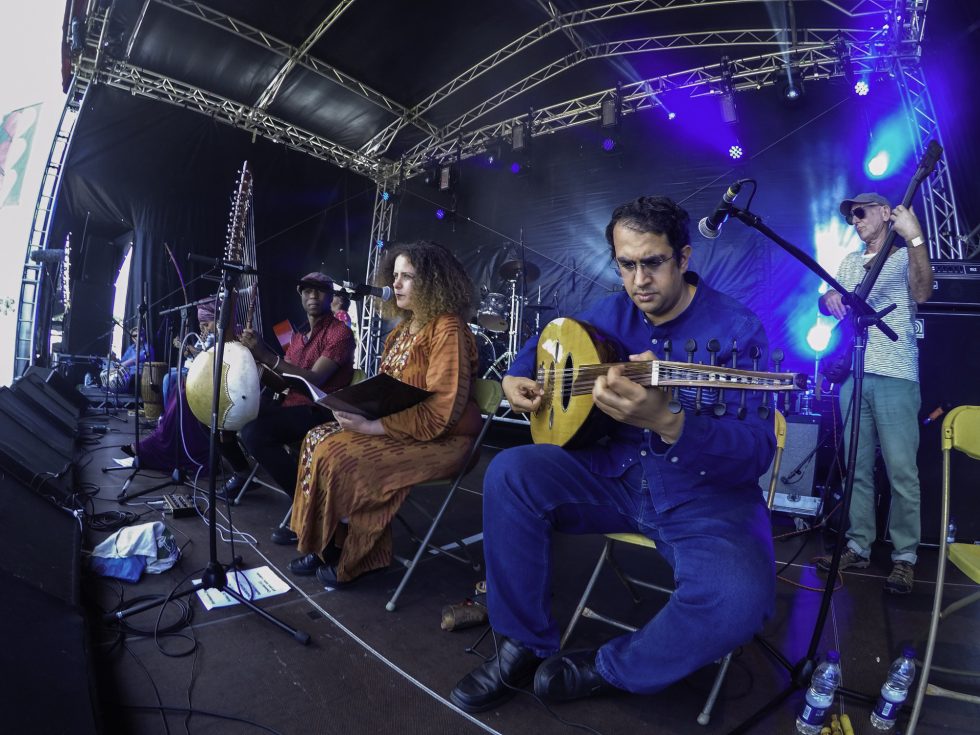 We have reach the last day. Where has all the other days gone? Is it about the age or the never ending sensation about exhilarating time. Over all, we are exhausted. I am the minibus driver-documenter and the back ground handy woman. I am having the best of my time. Especially being the one sleeping in the library room of the art centre is like an award I could have died for.

Except me, everybody is exhausted for the good. The band has never sounded tighter. We can see the electric current passing from one brain to the other, from Urdu to Hebrew to Senegalese and now with Kaitlin to Gaelic. Such a language that I wouldn’t have described it as a gentle touch of a summer breeze. Yes it is… Especially with Kaitlin’s voice, it is a language fallen from the heavens of Titans. When there were Gods still galloping across the mountains, they must have gifted the Gaelic to the Scottish. I would describe her voice as angelic oozes with ancient knowledge of life.

Rafiki arranged a Kashmiri lullaby. The song has strong hooks. Avital’s hypnotic trance voice is a hook in itself. She peddles the boat with magnetic waves to the door where magic happens beyond. Sarah is the The genres of music are so very different. Kaitlin sings in a traditional Scottish band. I am so sure what to call Rafiki Jazz’s genre. It is far from being traditional although everything about it is traditional. It is compliance of traditions breaks the form of tradition. she feels that it has been great for her to get out of her comfort zone and mixing different genres especially adding Gaelic element works a treat for the soul.

We can here there overtones, 4 harmonies, 15 instruments and 5 languages. Cath, dr Cath, is using her single steel pans which has more of a sugar bubble effect. Sarah, our Urdu origin British singer, has given a new theatrical reflection with her gestures to the piece. There is a constant movement in the band to maintain a balance in between the musicians, to prevent the musician ego or accommodate kindly the touchy-delicate musician nature. So the band sits. Except at this song, Kaitlin stands up whilst singing. She salutes her heritage and sets her DNA free with the sounds of a lullaby.

We performed at the Lyth Art Centre performance and exhibition space. It locates opposite of where we spend the week, the Anne House. The Anne House looks to the vast open moors which is occupied with friendly and curious cows. It was a short trip to make to walk 25meters.

We are waiting for the mixing to be completed to share with you our excitement. We are also waiting for Kaitlin’s new upcoming album with her band. My over all feeling is new album is sure to be heard by musically snobby ears.